Here, for the final time this season, and the last time for at least another year on this Blog, is a screenshot taken from the BBC website showing Leeds United top of the Championship, the second tier of English football. 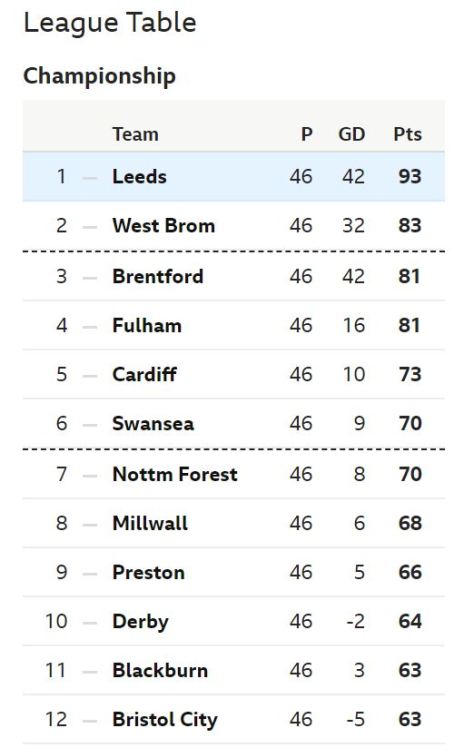 The regular season is over. Leeds, the team that I have followed since childhood, have finished as champions, returning to the Premier League after an absence of 16 years. The gap between Leeds and West Bromwich Albion in second place is 10 points, as you can see. This did not seem likely just eight days ago.

On Wednesday 15 July Leeds were about to play Barnsley at home and still needed 4 points from three games to guarantee promotion. The team managed 1 point from the last four games at the end of last season, and then failed to gain promotion through the play-offs, so I felt tense when the game began. I remained tense throughout, despite Leeds winning 1-0. Messages came from friends and family congratulating me on the team’s return to the big time, but we still needed 1 more point from two remaining games, away at Derby and home to Charlton. On Thursday morning the Chuck Berry song “Promised Land” was on my mind, and I stopped myself every time I started to sing it out loud. Surely that would be tempting fate, singing about heading to the Promised Land before promotion was confirmed.

Then, on Friday night (17 July), West Brom lost at Huddersfield, which guaranteed that Leeds would be promoted. It also left open the possibility of my local club here in West London, Brentford, overtaking West Brom and taking the second automatic promotion place. On Saturday Brentford lost at Stoke, which meant that Leeds would finish the season as champions and three teams (Fulham as well as West Brom and Brentford) still had a chance of finishing second.

Last night’s final round of fixtures saw Brentford lose at home to Barnsley, West Brom draw at home to QPR and Fulham draw at Wigan. Leeds, having won 3-1 at Derby on Sunday afternoon, beat Charlton 4-0, relegating them back to the third tier of English football. Since my last piece about the team’s progress (here, on 1 July), Leeds managed to win all six remaining fixtures. I can hardly believe it.

Nottingham Forest fans will have an even stronger feeling of disbelief at the way their season ended. Comfortable in the play-off places since last autumn, Forest only needed a point from their final two games to stay there. Last weekend they lost at Barnsley (yes, them again) but only an unlikely set of results would take them out of the Top Six, namely a heavy defeat at home to Stoke coupled with a big win for Swansea at Reading. And that’s what happened: final scores of Forest 1 Stoke 4 and Reading 1 Swansea 4 meant that Swansea’s goal difference was one better than Forest’s. Forest finished seventh. Their time outside the Premier League will stretch into a 22nd season. Swansea finished sixth and will take on Brentford next Sunday (26 July) in the first Championship play-off game.

I’ll be rooting for Brentford, cheering on Arsenal in the FA Cup Final on 1 August, and hoping that Manchester City can win the Champions League later that month. But the real business of the 2019/20 season is over for me. Forgive the quasi-biblical language, but after 16 years in the wilderness Leeds have made it to the Promised Land. And here’s Elvis Presley’s fine version of the Chuck Berry song for you to enjoy.

2 thoughts on “The Promised Land”