It is nearly a year since I posted a screenshot of a football league table on this Blog. I have done so at various times in recent years, usually with information from the BBC website. In May 2021 I posted this piece, showing the top half of the English Premier League, with Leeds United (the team that I have supported since childhood) in ninth place.

Here, by contrast is the bottom half of the Premier League table as it stands today. It shows Leeds United in 17th place, one place above the relegation zone. 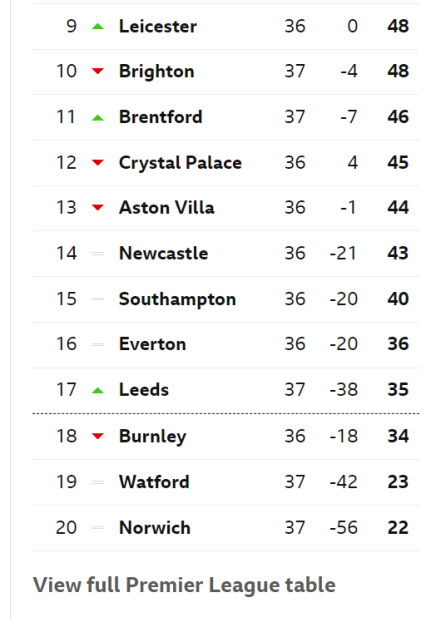 This could be the last time that the team are out of the relegation places this season. Burnley play at Aston Villa tonight. A draw will be enough to take them above Leeds, with one game remaining for each club. On Sunday afternoon (22 May) Leeds play at my local club (Brentford) and Burnley are at home to Newcastle United. I have a ticket for the Brentford game but have decided not to go, for many reasons. When I was offered it, many weeks ago, I hoped that the game would not have any significant impact on the final table. As things have turned out, the result of the game could determine whether Leeds remain in the Premier League.

If Burnley lose their two remaining fixtures, it doesn’t matter what happens at Brentford on Sunday: Leeds will stay up. If Burnley win their two remaining fixtures, it also doesn’t matter what happens when Leeds play on Sunday: they would be relegated. Unless, that is, Everton lose both of their games (or lose one and draw the other). In that case, even if Burnley win both of their games, a Leeds win at Brentford would be enough to relegate Everton.

With apologies to all their fans, I am simply hoping that Burnley lose both of their remaining fixtures, conceding early goals to reduce the tension as much as possible. It will make the next four days much more bearable for me.