Last month, sorting through a large plastic storage box full of cards, invitations, old paperwork and newspapers from significant dates, I found this:

It’s a notebook dating back to 1947 containing my father’s handwritten records of his athletics achievements: distances and times in the events he competed in at various meetings all over Ireland. He was Irish champion in sprints and jumps and also competed in throwing events.

I don’t recall seeing this notebook before, but I must have done: I put it in the storage box myself at some point in the last 15 years. The pages have yellowed but all the writing is still clearly readable. Here’s the inscription on the first page:

There is no end date on that first page, but the last entry is from the 1960s, three days after I was born. The second-last entry is from three years earlier, two months before my brother was born. There are plenty of gaps in the years before that. In fact his glory days, when he was winning national championships, are not recorded at all. There are lists of times and distances from Army meets and Leinster Championships but they peter out before 1955. Here’s a sample, a two-page spread with dates from 1952 to 1954. 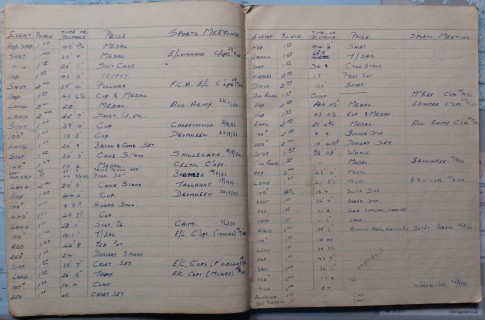 Five columns of information are recorded on each page: Event (e.g. 440 [yards] or Hop, for Hop Step and Jump as the Triple Jump was called then), Place (usually 1st), Time or Distance, Prize (e.g. Medal, Cruet Set, Pullover) and Sports Meeting.

A few days after I found this notebook I scanned all the non-blank pages and saved them as PDFs. They have been backed up onto various hard drives and USB sticks and are in two different cloud locations. I also took photos on my phone, and they are stored in a third cloud location. Although my father never used a PC or a Smart Phone he did have a Kindle in the last years of his life. The concept of his Kindle Library being stored on his local device and on a set of unspecified Amazon servers, available for download, gave him an understanding of the concept of cloud storage. If he were still alive he would know what I meant if I told him that images of his old athletics times and distances are now stored “in the cloud”.

My 14 year old daughter has been training with a local athletics club for a few years now, and has been competing in cross country and track events since 2017. All of her times have been posted on the web, as have all of her parkrun times. She competed in a 1500m race yesterday and ran a junior parkrun this morning, for the first time since long before lockdown. This means that somewhere, on the web and “in the cloud”, there are records of times run by members of my family stretching back from today (1 August 2021) to 19 June 1947: 74 years and counting.