10 years ago, in the late spring and early summer of 2010, London’s public spaces were home to hundreds of colourfully painted statues of baby elephants. The Elephant Parade, as it was called, featured over 250 of them in streets, parks, squares and a few indoor locations such as Westfield Shepherds Bush and the Museum of London in Docklands. During May and June of that year I visited every single one of them with one or both of my children. This photo shows the cover of the official Route Map and part of the map itself, including the largest single block of elephants, the 25 in Green Park. 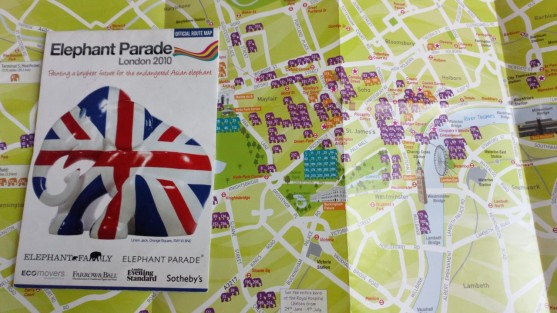 The cover of the Route Map shows “Union Jack”, which was in Orange Square SW1, a place I had never been to before 2010. It’s a few minutes’ walk from Sloane Square. My favourite design was “Tigerphant” which was in Chinatown. I liked it so much I bought the t-shirt. Here it is, with the Route Map for comparison.

As you can see, the “Union Jack” elephant is seated and “Tigerphant” is standing.  Those were the two types that artists worked with, and they were life-size (the size of a baby elephant rather than an adult).

While visiting the locations covered by the Elephant Parade I took photos of every design, with one or both of my children in each shot. Yesterday evening I spent a couple of hours looking through the entire set of digital images, over 1500 of them. It was a nostalgia-fest.

Exactly 10 years ago today (3 June 2010), my son and I spent the day travelling around central London, our busiest day for tracking down as many designs as we could. It was the Thursday of half-term, and he was five years old. We spent time in the City of London (including the Royal Exchange, Devonshire Square and the north side of London Bridge), crossed the river to the space beside City Hall, continued along the South Bank, visited India Place (near Bush House) and finished up at Covent Garden Piazza. We timed that last visit well. There was an elusive elephant called “Cloudia”, moved from place to place every few days, and her location was not shown on the Route Map. She happened to be at the Piazza that day, so it was something of a bonus to get photos of her.

I took 125 photos while we were out and about. I offer a few of them below, examples where my son’s face is obscured. As you can see, he enjoyed climbing the elephants and sitting on them. They were just the right height for him. There have been similar installations over the years (like the Cow Parade of 2002, the Big Egg Hunt of 2012, and the Paddington Trail of 2014), but the Elephant Parade was the one that really captured our imaginations. We miss the elephants.