My choices for “Album of the week” have become rather irregular. For six weeks in a row I managed to pick a different album each week, listen to it far more than I usually listen to a single disk, and then Blog about it. The reasons for starting the sequence were explained in this piece about “Pin-Ups” (David Bowie). Since taking a break in March I have only written about one further album, by the New York Dolls. In recent weeks I have mostly been listening to the double CD set “Sunrise”, Elvis Presley’s recordings for Sun Records, produced by Sam Phillips at his Memphis Recording Service.

There was always a chance that I would revert to the kind of artists I have spent over 35 years listening to (Bob Dylan, Tom Waits, David Bowie, Elvis), and that’s how things have turned out, but I have been listening to unfamiliar recordings by these artists. In the case of “Sunrise” one of the CDs contains very familiar recordings the other is mostly new to me.

CD1 contains all the songs that were on a cassette that I bought in the mid-80s, “The Sun Collection”, which I was prompted to buy by a piece in “The Listener”, a long-gone weekly publication from the BBC that reviewed and previewed TV and radio shows. It was in the early days of CDs and there was a piece comparing sound quality. A number of DJs were invited to choose recordings to listen to on vinyl and CD. As I recall, Radio 1 DJ Annie Nightingale chose Elvis’s Sun recordings as part of the test. She wrote that they sounded fine on CD, better than many of the more recent recordings by other artists: they lost much of their depth and range compared to how they sounded on vinyl. The Sun recordings didn’t sound better than they did on vinyl, but they were okay. 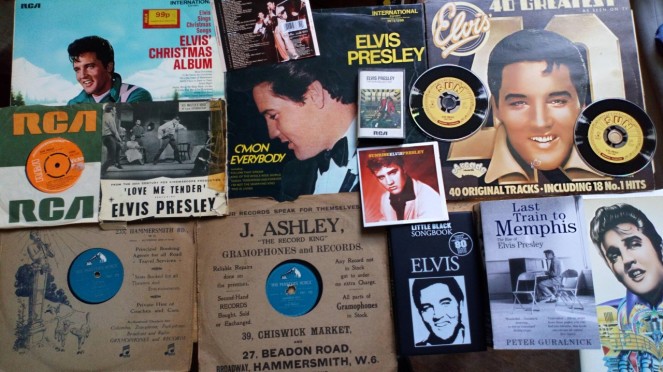 I grew up with numerous Elvis releases that my mother owned: 78s, 45s, EPs, LPs and even, in the 1970s, a tape of Gospel recordings that was one of only two pre-recorded cassettes that she had in the car. (The other was the Eagles 1971-75 singles collection.) The only Sun recording in her collection was a 78 of “Blue Moon”, released on the HMV label here in the UK. “I don’t care if the sun don’t shine” was on the other side. Do you have an opinion about the best pair of recordings ever released as a single? “Blue Moon” backed with “I don’t care if the sun don’t shine” is as good as it gets for me. The only other single in my collection that comes close is a copy of “At 17” by Janis Ian which has “Stars” on the other side. Feel free to put a case forward for, say, the Beatles double A side “Penny Lane” and “Strawberry Fields Forever”, or even (Elvis again) “Hound Dog” / “Don’t Be Cruel”. For me, the starting point for modern music is this mid-50s recording of “Blue Moon”.

That cassette of “The Sun Collection” contained “Blue Moon” and “I don’t care if the sun don’t shine”, and I played it for years. There were plenty of songs that I had never heard before, like “I’m Left, You’re Right, She’s Gone” and even “Blue Moon of Kentucky”. I was also pleased to find that Elvis had recorded two of the songs we had on 45 by other artists, which I knew well from repeated plays during my childhood: “Harbour Lights” (The Platters) and “I love you because” (Jim Reeves), which my father usually rendered as “I love you big horse”. Like every other Irish family I know of, Jim Reeves had a big place in our record collection. In our case he was second only to Elvis himself.

CD1 of “Sunrise” has been an exercise in nostalgia, taking me back to the 1980s, a time when I was learning how to drive, and spent much of my time involved with Film Festivals. My pre-recorded cassette version was always with me. When I had passed my driving test, it was the tape that I played most often, along with a double-cassette collection of Motown hits and “The Wizard of Oz” soundtrack album. The latter, recorded from vinyl, fitted exactly onto one side of a TDK AD-90, my blank cassette of choice back then. I left other tapes in the car, but always removed “The Sun Collection” when I got home. When I used a Walkman (as I did when travelling abroad for Film Festivals) I always had it with me. 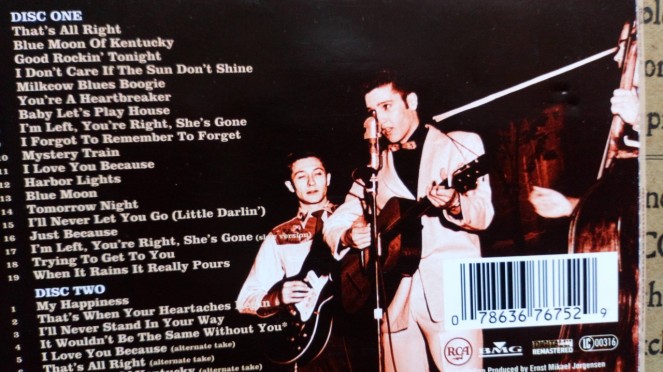 The order of the songs on CD1 is slightly different to that old cassette, and there are two additional tracks: “Tomorrow Night” and “When it rains it really pours”. The latter was the last track on Side 2 of the album “Elvis for Everyone”. I know that because, in my childhood, I often cued up that specific track rather than listen to the rest of the album. My skill at dropping the needle on the space between songs was honed on “When it rains it really pours” more than any other song.

I appreciate that some vinyl purists might feel uncomfortable at the idea of placing the needle anywhere other than the very start of a record, but can confirm that there appears to be no harm done in this case. I have just played both sides of “Elvis for Everyone” (which will celebrate its 55th birthday this year) and it’s fine – no extra pops or crackles in that space before Side 2, Track 6. That’s more than can be said for many of the CDs in my collection which no longer play properly even in the car, which (like most car stereos) is the most forgiving and resilient CD player available to us.

In contrast to the contents of CD1, the recordings on “Sunrise” CD2 are mostly unfamiliar to me. That even includes “My Happiness”, the song that Elvis, aged 18, recorded on his first session at Sun, at a cost of $4. I don’t recall hearing it before last month.

I bought this double CD set at least 10 years ago, but hadn’t played the second disk until last month. This is a good indicator of how similar my record-buying and book-buying habits can be. There are books on my shelves that I bought in the 1980s and still haven’t read yet. There are CDs that I acquired over 20 years ago and have still never played.

I was prompted to play both “Sunrise” CDs while reading “Last Train to Memphis: The Rise of Elvis Presley”, the first of Peter Guralnick’s two-volume biography. A friend gave it to me as a birthday present nearly 20 years ago, along with the second volume (“Careless Love: The Unmaking of Elvis Presley”). I marvel at her generosity: the combined retail price for these two paperbacks was a shade under 30 quid, even then.

It took me nearly 20 years to start it, but I read “Last Train to Memphis” in a few days beginning on Easter Saturday, immediately after finishing “Ulysses”, which I had been hoping to re-read for decades. It’s excellent, full of detail, based on hundreds of interviews with people who knew Elvis. It takes us to September 1958. Gladys Presley has just died. Elvis is distraught and sailing to Germany for his military service. Guralnick also wrote the sleeve-notes for “Sunrise”. He knows what he’s talking about.

CD2 contains alternate takes of some of the songs on CD1 (not all of them complete) and some real treats and surprises. The biggest treat is his version of “Shake, Rattle and Roll”. The biggest surprise was “Tweedle Dee”, which I only knew from (of all people) Jimmy Osmond’s version in the early 1970s. (It was young Osmond’s follow-up to “Long-haired Lover from Liverpool”, the 1972 Christmas #1 which kept both David Bowie’s “Jean Genie” and “Solid Gold Easy Action” by T Rex at #2.)

“Shake, Rattle and Roll” takes me back nearly 30 years. In the early 1990s the London-based radio station Capital Gold used to have an Elvis hour presented by Randall Lee Rose. He introduced himself as “Your buck-eyed refugee from across the sea”. I recorded a few of these shows onto cassette, sometimes pausing the tape when the adverts came. This meant that every song would squeeze onto one side of a TDK AR-90. Other times I left the tape running and got 45 minutes’ worth of the show, missing either the beginning or the end. One of these recordings definitely had Elvis’s version of “Shake, Rattle and Roll”. The last time I heard it was from that cassette. I knew the Bill Haley and the Comets recording from my childhood, but Elvis’s is so much dirtier, lyrically and sonically. Bill Haley begins, “Get out in that kitchen and rattle those pots and pans”. Elvis starts with, “Get out of that bed, wash your face and hands”. It makes all the difference.

My “Elvis Hour” recording of “Shake, Rattle and Roll” resides (as far as I know) in a large plastic storage box full of cassettes which I haven’t looked through for many years. At some point I will go through it, and dig out a few of those Capital Gold recordings. I expect that they will play without any difficulty, just like my 55 year old copy of “Elvis for Everyone”, and unlike certain CDs in my collection. Maybe I will play them while reading “Careless Love”, the second part of the biography. They would induce nostalgia for a different time in my life (early 1990s rather than mid-80s) but they would not qualify as candidates for any future “Album of the Week” pieces.

Previous “Album of the Week” pieces: