Here’s a picture of Connector, a childhood toy that we were given back in the 1960s.

As I recall, it was a joint present for my brother and me. Our birthdays are two days apart, so bigger gifts like this were usually given jointly rather than to one or other of us. As the box says, it’s “The Danish Architect Willy Fangel’s Building Set”. Further down are the words, “educationally, the right toy!” It consists of wooden sticks and blocks that connect together to make any number of shapes and designs. We played with it often when we were young, but it had remained unused during my own children’s lives, until last week.

The box was in my daughter’s room, at the bottom of a pile of other toys. I took it downstairs, dusted it, then removed each wooden piece and used wet-wipes to clean them. The dust had got everywhere. Some of it might even have been from the 1970s. When the pieces had dried my daughter started playing with them, a welcome break from the RE homework that took up a surprising amount of her half-term holiday. Here’s an example of one of her first creations.

Until yesterday evening the box sat on a table in the living-room, with a different wooden structure perched on top of it. Half-term is over, the children are back to school today, so the Connector pieces have been taken apart and placed back in the box.

Although it was “educationally the right toy!” I have never met anyone else who had a Connector set. I have never seen it in a toy shop. The only time I have ever seen it outside my own home is in the Mexican film “Roma”, for which Alfonso Cuaron won the Academy Award for Best Director last year. I watched it for the first time last month. Towards the end of the film, the camera pans across a child’s bedroom. There, scattered across the floor are pieces of Connector.

In this memory about an advert that my brother and I appeared in, I mentioned how members of my family would shout out to anyone who wasn’t in the room whenever Chiswick House Grounds (a local landmark) came on TV, and on the few occasions when the advert aired. I felt like doing the same when the Connector pieces appeared onscreen, but I was watching on my own late at night and it wasn’t worth waking anyone in the family to show them pieces of a toy that they’d never played with. When she’s older, my daughter might watch “Roma” for herself and feel the same sense of nostalgia that I felt on seeing “Danish Architect Willy Fangel’s Building Set” transported thousands of miles away to a Mexican film set. In the meantime, here’s how it looks all boxed up, ready for the next time someone wants to play with it. 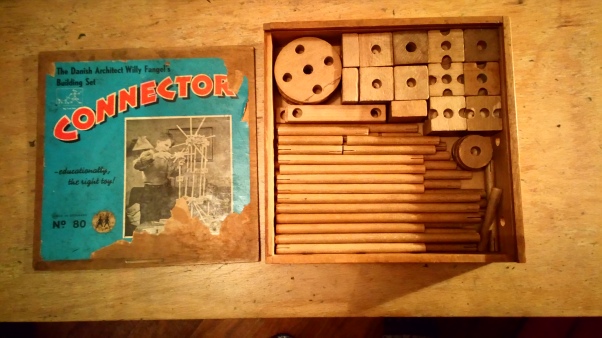