Here, for the fifth successive month on this Blog, is a screenshot from the BBC website showing Leeds United at the top of the Championship, the second tier of English football. 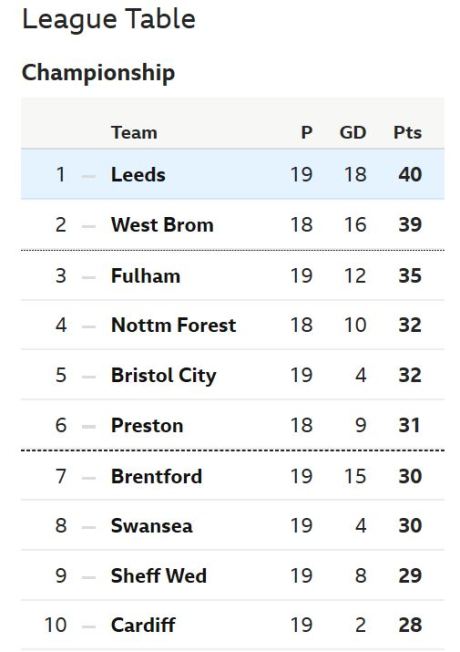 As mentioned in many earlier pieces, like this one from November, I have followed Leeds since childhood, and I have timed these regular posts to coincide with the brief times that the club has been top of the table this season. As in the previous month, Leeds spent most of November in the top three, but very little of that time in first place. In fact, for most of the month Leeds were outside the top two, third on goal difference from Preston North End. That all changed nine days ago, when Preston lost at Derby and Leeds scored a late winner at Luton to return to second place. Last Tuesday Leeds won at Reading with another late goal and sat top of the table for 24 hours until West Bromwich Albion beat Bristol City on Wednesday night to reclaim top spot. Preston lost again that night and, as you can see in the table above, have dropped to sixth place.

West Brom play at Preston tonight. Whatever happens, Leeds will remain in the top two for another week at least. If tonight’s match is drawn, Leeds will stay top on goal difference until Saturday, thanks to the 4-0 home win against Middlesbrough two days ago. If West Brom win, they will return to the top of the table.

All being well, there will be plenty of opportunities in the first five months of 2020 to show Leeds sitting at the top of the Championship. If that’s the case on 1 January, after the early evening game at West Brom, it will be a very happy start to the New Year for me, and it will prompt another piece just like this one.