Earlier this month I wrote about Saul Bellow’s 1976 memoir “To Jerusalem and Back”, noting that I would “mention it again soon on these pages”.

The phrase that prompted me to write that earlier piece, and which can be found on page 108 of my “Penguin Twentieth-Century Classics” edition, was “Now that the reading fit is on me again”. It also prompted me to do something I have not done for many years: make a note in the margin of a physical book. For good measure I used one of those small Post-It Note Bookmarks so that I could find the words again easily. All of this has got me thinking about marginalia, the marks and notes people make within books, something that I have never fully resolved.

The only times that I annotated books with a degree of confidence or in any detail were when dealing with school and university texts. Even so, I made the notes in pencil rather than pen in case I wanted to erase them later. Over the last year I have returned to three of my English A-Level texts (“Hamlet”, “Troilus and Cressida”, and the poems of Alexander Pope) fully prepared to be embarrassed by my teenage marginalia. I was relieved to find that they were better than I feared, no cause for embarrassment after all. When it came to more general reading I never had the same level of conviction as with set texts, and rarely made any marks on the pages themselves.

I went through a phase in the 1980s of making notes on small pieces of card and keeping them inside each book. They weren’t 3×5 index cards as such but served the same purpose. I had hundreds of items like the one pictured below, leftover invitations to a nightclub theme night (“Ronelles Goes Roman TOGA PARTY”) which we were paid to use as inserts for a magazine I edited at university. On the reverse of this example are my annotations, in tiny handwriting, for Orwell’s “Ninety Eighty-Four”, which I re-read a year or two after graduating. I do not feel brave enough to share those notes with you right now. 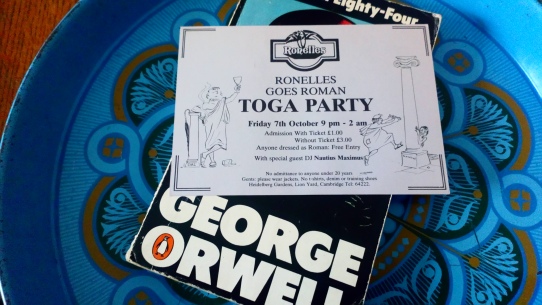 Last month I re-read Flann O’Brien’s “The Third Policeman”, which I first read (for pleasure) in the early 1980s, and was surprised to find that I had made a few marks in the margins and within the text. On page 72 of my 1981 Picador edition I had underlined the words “Atomic Theory” in the sentence, “’Did you ever discover or hear tell of The Atomic Theory’, he inquired.” Then, on page 74, I had put vertical lines beside the following paragraphs:

“The gross and net result of it is that people who spent most of their natural lives riding iron bicycles over the rocky roadsteads of this parish get their personalities mixed up with the personalities of their bicycle as a result of the interchanging of the atoms of each of them and you would be surprised at the number of people in these parts who nearly are half people and half bicycle.”

“And you would be flabbergasted at the number of bicycles that are half-human almost half-man, half-partaking of humanity.”

This turns out to be the main thing I had remembered from the book, the ridiculous but compelling notion that there is an exchange of atoms between humans and bicycles, leading to people “half-partaking of humanity”.

Deep down, my reluctance to make physical marks on my reading matter was partly down to the vague possibility of future embarrassment, but there was another reason for it. I always wanted to keep my books in the best possible shape. The money I spent on them, at school and at university, was a major part of my disposable income. I rarely spread the pages of a paperback to 180 degrees in case it damaged the spine, and I would certainly never open out the book 360 degrees the way that some of my classmates did, so that the front cover touched the back cover. This was guaranteed to split the spine and could easily divide the book into separate chunks. Glancing at the spines on my bookshelves you would be unable to tell which ones had been read and which had not.

These days I am less precious about the physical state of the books on my shelves. At home I use bookstands to keep paperbacks open. These stands are designed for cookery books, but I am now happy to spread the pages of any paperback completely flat to make them easier to read. Gone are the days when I would open pages no wider than a right angle. I haven’t taken this change of approach as far as marking the pages but it’s much easier to tell, from their spines, which volumes have been read and which have not.

So far I have only been dealing here with physical books, but much of my reading over the last decade has been onscreen. With e-books my tendency to highlight and annotate runs free. But that’s a different story.