Here’s my monthly screenshot of the top of the Championship table, the second tier of English football. Like all the others (most recently in this piece) it was grabbed from the BBC website. 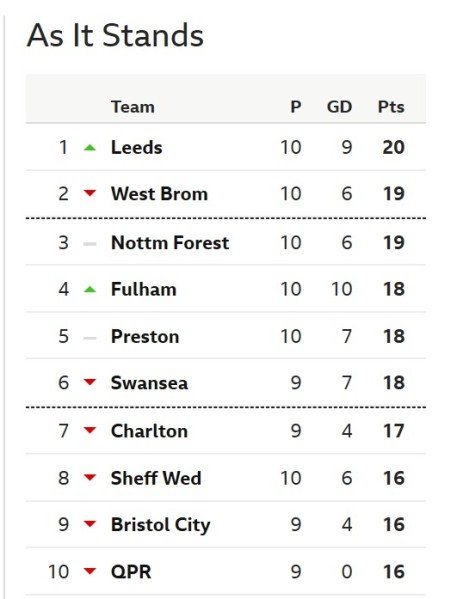 Like most screenshots included on this Blog since last December, it shows Leeds United, the team that I have supported since childhood, leading the way. I include these images as a reminder of the team’s time at the top of the table, to make myself feel better, and just in case it doesn’t last.

Last weekend Leeds slipped to 4th in the league, thanks to a defeat at Charlton, wins for Nottingham Forest and West Bromwich Albion and Swansea’s draw with Reading. West Brom went top and travelled to Elland Road for last night’s big game. There were other matches being played but I concentrated on this one, right from the pre-match chat (Tony Pulis and Danny Higginbotham in the Sky Sports studio) through to the post-match interview with Marcelo Bielsa. He apologized repeatedly for substituting Tyler Roberts with 15 minutes to go after bringing him on as a sub at half-time.

Leeds won 1-0, something they were unable to do in previous home matches against Nottingham Forest and Derby County, when countless chances were not taken, and the away team equalized late on for a final score of 1-1. I only checked on last night’s other results after the post-match interviews, happy to find that Forest had drawn at Blackburn and Leeds were returning to the top, for 24 hours at least. Tonight, Swansea travel to Charlton. If they win, they will overtake Leeds again. If Charlton win by 6 goals, which seems unlikely, they will jump from 7th to 1st. A draw would suit Leeds perfectly. It would also leave Leeds as the only team averaging 2 points per game after the first 10 fixtures.

I was concentrating so much on the action from Elland Road that last night’s big European games (Matchday 2 of the Champions League group stages) completely slipped my mind. Usually I would take a look at the half-time scores at least, but it was 11pm before I read about Manchester City’s home win against Dinamo Zagreb and Tottenham’s record-breaking home game against Bayern Munich. It was record-breaking for all the wrong reasons unfortunately: a 7-2 defeat, the first time they have conceded 7 goals at home, ever, and the worst defeat at home for an English club in Europe. I took no pleasure from any of that, but was still buzzing from Leeds managing to hold on to a 1-0 lead, for a change.