WARNING: There are three photos at the end of this piece that show the effects of insect bites on my skin this summer, and an infection that affected my palms some years ago. You might find them rather unpleasant but they illustrate what this piece is about. If you are squeamish about such things, be careful not to scroll beyond the final paragraph.

We are halfway through our holiday in Spain, visiting my brother and his family. He has lived here since 1983. My wife, son, daughter and I have not visited this part of the world together, in the summer, since 2011. The children were just 6 and 4 back then. We visited as a family for Christmas in 2013, and my son and I came here two years ago, when he was 12. My daughter, now aged 12, had not felt the Spanish sun on her face for 8 years.

On previous summer holidays here, the combination of sun, sea, sand, swimming pools and sunscreen left me with some strange rash on my hands. Eventually I was prescribed an antibiotic ointment that killed it off. Before that, a succession of different treatments never quite put it to rest. It would always return when summer came round. I think that it was triggered mainly by sunscreen but we never established the exact cause. I haven’t needed that antibiotic ointment since 2016, but it was the only thing my brother wanted me to bring from the UK. I had used less than half of that last 30g tube that I was prescribed and was happy to donate it. Other people might request Marmite or a specific brand of tea, but he wanted the magic cream that restored the skin on my hands to full health, even though the expiry date on the tube was December 2018. He had a problem with the skin on his palms, but the ointment seems to have done the trick for him. His wife asked for “Kimberley Elite”, the chocolate-covered Kimberley biscuits that are an Irish speciality, and my wife managed to track down every available packet in our corner of West London.

The skin on my hands may be healthier than it was the last time all four of us came to Spain in August, but the insect life has played merry hell with other parts of my body. The day before we flew out here I spent an hour or two tidying up the garden. In cutting back a substantial amount of foliage I displaced whole ecosystems of bugs, and they went down fighting. The biggest of the bites I received is visible in the photo of my right hand at the end of this piece. The most elaborate network of insect bites I have received since we arrived here is a series of five, on the back of my left knee. I find it fascinating. Was it one especially hungry bug, or a whole family of them lined up to feast on newly-arrived blood?

Instead of the usual holiday snaps and messages (“Weather is wonderful, wish you were here”), here are a few photos indicating the effect that visits to the province of Alicante have had on my skin. If you are squeamish about these things, look away now. 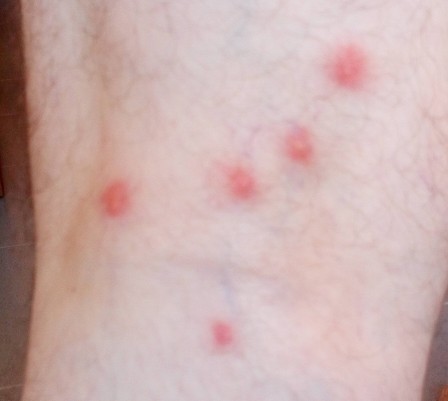 The rash on my right hand after an earlier summer holiday

My unblemished right hand, August 2019, and a bite from an insect in West London