The new football season is upon is. The first round of games in the Championship, the second tier in English football, played out last weekend, beginning on Friday night and ending on Monday night. Tonight, also a Friday, sees the opening fixture in the Premier League, England’s top tier. Liverpool host newly-promoted Norwich City.

Last weekend, Leeds United (the team that I have supported since childhood) began their 16th consecutive season outside the top flight. For the fourth year in a row the opening game was on a Sunday afternoon and broadcast on Sky Sports. For the fourth year in a row I was able to see at least part of the game. In fact, I caught every second of the 3-1 win away at Bristol City. It put Leeds at the top of the table, as the following screenshot from the BBC website shows. 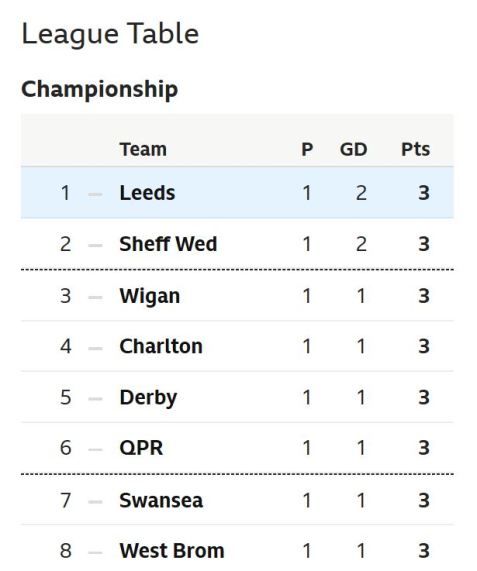 Last season, from December 2018 to May 2019, I published at least one post per month which included similar screenshots. The last of them, here, contained links to all of my previous pieces charting how close Leeds came to gaining promotion to the Premier League. I have created the screenshot above in case it’s the only time that Leeds are top of the Championship this season, although it’s also possible that the team will stay there, on and off, right through till the final game of the season. That game is scheduled for 2 May 2020, at home to newly-promoted Charlton Athletic, whose manager Lee Bowyer used to play for Leeds. I assumed that Bowyer was still there when Leeds were relegated from the top flight back in 2004, but this Wikipedia piece put me right. He moved to West Ham in 2003. Wikipedia also reminded me of Bowyer’s failed drugs test (for cannabis use) and his conviction for affray after an incident at McDonalds, among other biographical details which have never slipped my mind.

The last home game of the 2003/04 season was also against Charlton, the 3-3 draw that confirmed that Leeds would be relegated from the top division. I was there, but needed to check this page on the BBC website to confirm who was playing that day. I remember Alan Smith being paraded around the ground at the final whistle. Shortly afterwards he left to play for Manchester United. I was less sure about the rest of the team. The next home game, in August, featured seven debutants. Only Frazer Richardson, Gary Kelly, Michael Duberry and Matthew Kilgallon remained from the previous starting XI. In both games, Lucas Radebe came on as a sub and Scott Carson was an unused sub.

Carson only played a handful of games for Leeds before moving to Liverpool in 2005. Yesterday, just before the transfer window closed for the summer, Carson signed for Manchester City on loan from Derby County. I was following the transfer deadline news more closely than usual, hoping that Leeds would be able to bring in another striker. Kemar Roofe, the club’s top scorer last season, has joined Anderlecht. The club has also lost defender Pontus Jansson to Brentford, and goalkeeper Bailey Peacock-Farrell to Burnley, but the most pressing need was for a replacement striker. Eddie Nketiah has arrived, just in time, on loan from Arsenal for a year. Other loanees for the year ahead include the following: goalkeeper Illan Meslier from Lorient, defender Ben White from Brighton, winger Jack Harrison from Manchester City, Wolves forward Helder Costa and winger Jack Clarke (bought by Spurs in the summer but loaned back to Leeds for the season). The last time Leeds relied so heavily on loan signings it ended in relegation from the Premier League. Roque Junior, the Brazilian World Cup winner, was the most memorable (and least successful) of Peter Reid’s recruits at the start of that 2003/04 season. In spite of that precedent I have high hopes for the season ahead. After all, Leeds are top of the table. One game down, 45 to go.