I have been meaning to dig out my old autograph book for a while. It came to mind at a family funeral I attended back in January, and at another one earlier this month. Two weeks ago today I was travelling to Ireland by train and boat for the second of these funerals, as recorded here. My 24 hours in Dublin did not prompt vivid memories in the way that I expected but flicking through autographs from over 40 years ago certainly has. Many of the inscriptions are from family members in Ireland. They were all written in the 1970s. As you might expect, many of the contributors to my childhood autograph book are now dead.

The book measures around 12cm x 9cm. Here’s a photo, taken with the cover of the Boothill Foot-Tappers classic 7” single “Get your feet out of my shoes” so you can compare sizes. 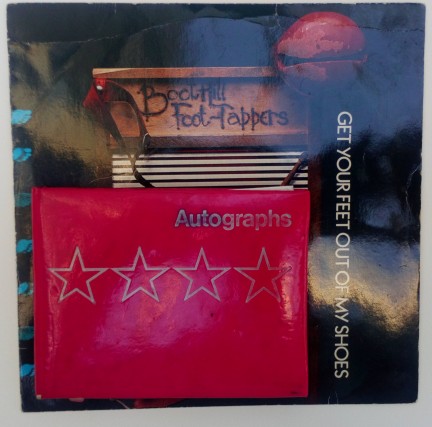 All these years later I can’t recall whether I bought the book myself or was given it. Maybe it was a birthday present. The first entries are dated 1973. I carried it around with me, on and off, for just under two years. All the entries from Ireland come from our trip there in 1974, the last summer holiday that the five of us (mother, father, brother, sister, me) took together. We travelled to Ireland once more as a family, for Easter 1977, but I had long since stopped asking people for autographs by then. That’s why I only have one autograph book. If I had been serious about it there’d be a whole set of them.

While we were on holiday in August 1974 we saw Erskine Childers, then President of Ireland, in the grounds of Kilkenny Castle. I was bold enough to approach him (and his bodyguard) and ask him to sign my book. He did, and here’s a photo of the relevant pages, including my pre-teen handwriting explaining who he was (and showing that I couldn’t spell “Erskine” correctly). He died in November of that year.

The following year, during the Easter holidays, I asked Kenny Everett for his autograph. He was working for Capital Radio at the time. We had visited Euston Tower, where the station was based, to pick up badges and car-stickers. He was coming out of the main entrance, carrying a large tape recorder, or something similar. Again, here are the relevant pages from the book.

Two other people who were famous in the 1970s signed my book: the comedian and impressionist Stanley Baxter, who came to give a talk at our school, and Norman Hunter, the author of the “Professor Branestawm” series of books (not the Norman Hunter who played for Leeds United and England in the 1960s and 70s). Hunter the author died in 1995 aged 95, a few weeks before Kenny Everett, who was just 50. I have just learnt, and am pleased to report, that Stanley Baxter is still with us, having turned 93 in May.

These were not the autographs that brought back vivid childhood memories. It was the other ones, of people who were not famous in the 1970s, the shaky handwriting of my mother’s maiden aunts and their elderly friends, the place-names (and sometimes even addresses) noted down by long-deceased family members. There are Reilly’s, O’Reilly’s, Ghee’s, O’Hara’s, Kelly’s, Galligan’s and Dunne’s, gathered from Cavan, Longford, Dublin, Kilkenny and indeed London. I’ll finish with this one, my mother’s contribution, pride of place on the opening page.