My understanding of the technical details of electric guitars is limited. I have read the following sentence many times, and have only a vague idea of what it means: “Several variants have appeared throughout the years with a wide assortment of pickup configurations, such as a humbucker in the neck position, three single-coil pickups, and even dual humbuckers with special wiring schemes”. Even so, the Tele has always been my instrument of choice.

In case you can’t picture one, here’s a page showing Bob Dylan with a blonde model, and here’s a site (www.strummerguitar.com) dedicated to Joe Strummer’s Tele. This page (titled “Evolution of a Legend”) shows you its transformation from the stock Sunburst finish (when Strummer was in the 101ers) to the customized beast he played when he was in The Clash. And if you want to see one in action, check out this footage of Tom Petty and the Heartbreakers performing “American Girl”, something I also linked to here, shortly after Petty died in 2017. In the clip Petty is playing a Gibson Flying V and Mike Campbell is playing a Tele.

Over 20 years ago, someone I had known for a long time bought me a custom-built semi-acoustic guitar, shaped like a Telecaster. It was made by Chandler Guitars in Kew, one of many such stores that has closed in recent years, and it was offered by way of an apology for some distinctly bad behaviour in the previous year. If he’d known me better, he would have bought me a regular Fender model instead. As things turned out, he bought a pink Telecaster for himself (the fifth of six electric guitars he owned between 1979 and 1999) and I spent a year or two playing it. It travelled with us on a trip to New York City and New Jersey in May 1999, a journey documented in some detail in a series of posts starting here. As far as I know that pink Telecaster is still somewhere in New Jersey.

Ten years ago I bought my first, and so far only, solid-bodied electric guitar. It was a genuine Fender Telecaster, from a shop in Denmark Street, as you might expect. I was in the market for something like that pink model, or a plain white (or blonde) one. Instead, the one that looked and felt right was in Lake Placid Blue.  Here is a cropped photo of it from the day I bought it. It is in the hands of my son, who was 4 at the time. 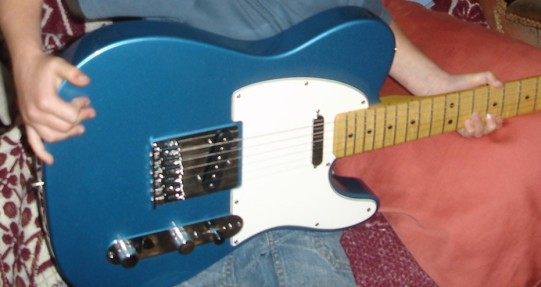 But why am I telling you all this now? Because the word Telecaster has been in the news lately in a completely different context. It’s the name of a horse that competed in the Epsom Derby two days ago. I spotted the name in the paper last month, in the sports section. I rarely read the racing pages but the heading caught my eye and I couldn’t ignore a story about a horse called Telecaster. It won some significant race in May and was being suggested as worth a punt in the Derby. Saturday came and went, the race was run, and I only read the day’s sports pages on Sunday morning. As you can read here, Chris Cook advised that “Telecaster can defy draw hoodoo to grab Derby glory”. It was “surprisingly backable at 5/1”. In the last 10 years I have bet on the horses two or three times, and only on the Grand National like most people. If I had read about Telecaster before 4.30pm on Saturday I would have been tempted to run to the nearest bookies and stick some money on it. But I didn’t, and have saved myself a few quid as a result. Telecaster, the horse, finished last. Anthony van Dyck, ridden by Seanie Heffernan, won at 13/2. And I missed the whole thing.