A few little observations about English football, specifically about goal difference. Look away now if that’s not your kind of thing.

This season I am spending even more time than usual studying football league tables, the Championship table in particular. Right now it shows my team, Leeds United, at the top, ahead of Norwich City by 1 point and with a superior goal difference. Here’s a screenshot of the Top 6, taken from the BBC website. 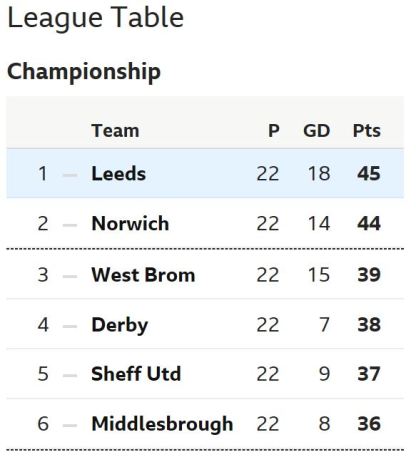 If, as in the last two seasons, Leeds drop out of the Top 6 before the end of April, and we spend the summer preparing for a 16th consecutive season outside the top flight, I can console myself with this graphic, a reminder of a happy time at the top of the second tier of English football. It’s the team’s highest league placing for over 14 years.

Thoughts of goal difference prompted me to check the details of the 1965 English football season. Newly promoted Leeds finished level on points with Man U that season, but ended up in 2nd place on “goal average”, or more accurately “goal ratio”. Many years ago someone told me that if the places had been decided on goal difference Leeds would have been champions. I believed him but had never checked the details until now. It looks like he was mistaken. As this Wikipedia page shows, if goal difference had been the deciding factor Man U would still have won: Goals For 89, Goals Against 39, for a difference of +50. Leeds scored 83 and conceded 52 for a difference of +31. Ah well. There are still plenty of other historic injustices to keep me going, not least the 1975 European Cup Final.