One of my local tube stations here in West London is Stamford Brook. In the late 1990s the Dutch international footballer Jaap Stam played in the Premiership, for Manchester United. At the other end of the tube network, near Cockfosters, where the Piccadilly Line ends, is a station called Southgate. England international Gareth Southgate also played in the Premiership in the late 1990s, for Aston Villa. Based on these two station names, and the amount of time I spent travelling on London Underground back then, I started looking out for other footballer surnames contained within the names of stations, aiming to build up whole teams. It wasn’t enough to find 11 surnames. I wanted to play a proper formation, ideally 4-4-2 (4 defenders, 4 midfielders, 2 attackers) but 3-5-2 was acceptable.

I had three possible teams in mind: first, a team of players who had played in the top division of English football at some point; secondly a team of current Premiership players; finally a team of international footballers (current if possible, otherwise international players from any era). I managed the first easily but never quite nailed down the second or third teams.

Naturally this whole venture relied on knowing enough about the London Underground and about professional footballers. In the late 1990s, as I recall it, players based in England usually stayed here for several seasons. There wasn’t a great deal of movement to clubs in other European Leagues. It was a big deal when players like Marc Overmars and Jimmy Floyd Hasselbaink moved to Spanish clubs (Barcelona and Atletico Madrid respectively). I had a better knowledge of Premiership players then than I have now. I would be hard pushed to name more than a handful of players from West Brom, Stoke City or Watford, all teams playing in the top tier of English football. I could probably name more players from the Blackburn Rovers team of 1999 (the one that got relegated that season, not the Premiership Champions of 1995).

Here’s a record of the team that I created back in 1999-2000 from surnames that feature on the London Underground network.

The goalkeeper was an easy position to fill: David James (St James’s Park) was both an England international and playing in the Premiership (at Liverpool and then Aston Villa). I could also have chosen Alex Stepney (Stepney Green), who played at Manchester United in the 60s and 70s (and also played once for England).

My defence featured 3 centre backs: Jaap Stam (Stamford Brook), Gareth Southgate (Southgate), both mentioned above, and Steve Foster (Cockfosters), all of whom played international football and in England’s top division. Foster was at Brighton and then Luton in the 1980s but was no longer playing in the late 1990s. He also won 3 caps for England.

I played a 5-man midfield, all of whom played in the Premiership during the 1990s: David White (Whitechapel), of Manchester City and Leeds (also 1 England cap); Kingsley Black (Blackfriars), of Nottingham Forest (30 caps for Northern Ireland); Steve Stone (Stonebridge Park), also of Nottingham Forest (9 caps for England); John Oster (Osterley), who moved from Grimsby to Everton in 1997 (13 caps for Wales); I struggled to find a fifth international playing in midfield in the Premiership so opted for Sheffield Wednesday’s Graham Hyde (Hyde Park Corner) who never played international football.

In attack I had two international players from the 1960s: Geoff Hurst (Buckhurst Hill), of West Ham (49 caps and 24 goals for England, including his hat-trick in the 1966 World Cup Final – which is why I had to include him) and Ian St John (St Johns Wood) of Liverpool (21 caps for Scotland).

I had plenty of substitutes too. There were goalkeepers Chris Woods (Woodside Park) of Sheffield Wednesday and Gordon West (West Kensington) of Everton (both played for England). Defensive subs were harder to find, and I only came up with West Ham’s Billy Bonds (Bond Street – I cheated a bit there) in defence (good enough to play for England but he never did). My substitute midfielders included West Ham’s Geoff Pike (Turnpike Lane), Leeds United’s Mark Ford (Oxford Circus), and Luton’s Ricky Hill (Sudbury Hill), the only one of that trio to play international football (for England, 3 times). The strikers waiting on the subs’ bench were West Ham’s David, or Dave, Cross (King’s Cross), Everton’s Adrian Heath (Heathrow Terminal 4) and Leeds United’s newly-arrived Alan Smith (Hammersmith), who had yet to play for England. (There were plenty of other Smiths you could choose from – Arsenal’s Alan Smith or Liverpool’s Tommy Smith, both of whom played for England.)

I even included a Premiership referee whose surname was on the Underground: Philip Don (Hendon Central).

I recently found a print-out of the team that I created all those years ago. That’s why I’m telling you all this. It also got me thinking about which players I could have added in the intervening 15 years. At least three England international defenders from those years feature on the Underground: Zat Knight (Knightsbridge), Ledley King (King’s Cross) and Wayne Bridge (Stonebridge Park). I realized that when South Korean international Park Ji-sung was playing for Manchester United (and wearing the name “Park” on his shirt) Stonebridge Park station was made up of three Premiership footballer names: Steve Stone, Wayne Bridge and Park Ji-sung. I’ll work on this some more, but wanted to record that team from 1999-2000, and here’s a graphical representation of it. 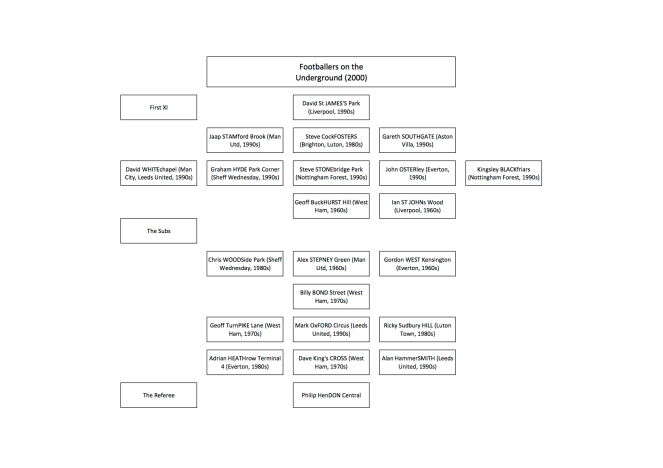 2 thoughts on “Footballers on the Underground”